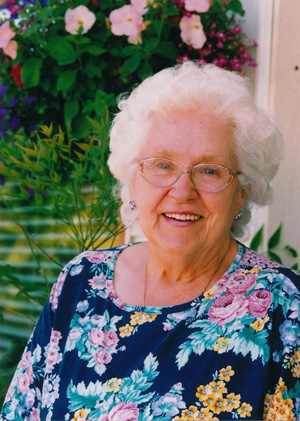 I was born and raised on a farm in Rosetown, Saskatchewan, in 1931, the youngest of seven children. We moved to Victoria, BC when I was 13, and my Dad worked in a shipyard.

My husband and I arrived on Salt Spring in a pick up truck in 1955 with a bunch of furniture in the back of it. My husband was a logger. We moved from Victoria to Salt Spring Island for a three-year contract. I was expecting Lorraine. I had a good job in Victoria and hated to leave because Ken’s birthday was July 5th, the day we left. I remember crying and crying. I sat up and saw Mount Bruce and the little St. Paul’s Catholic Church. It was just beautiful, and I thought, “Well it might not be so bad after all.”

We rented a place on Cushion Lake. My husband had five men working for him, two locals and three boarding with us. I had to cook for them. I cried and cried. I couldn’t drive and didn’t go out for a week. One day when I was large with child I got dressed up with heels and went downtown. The sidewalks were wood with cracks and my heels got caught.

I knew I needed people. I enjoy people and like helping them. My next trip to town I said hello to everyone I met and asked them who they were. I just walked around and smiled and made conversation. I have always been like that, and now I can’t remember my own name!

We had hard times. I had a fish and chip shop, “The Reef” from 1969 to 1971. It was in the little building where the Phoenix School is. We served fish and chips and great soup. It was a success and a great place for the kids to come. They enjoyed the music and meeting their friends, and eating chips! It was a safe place for them to be. I now see those kids as parents, and some of them as grandparents! 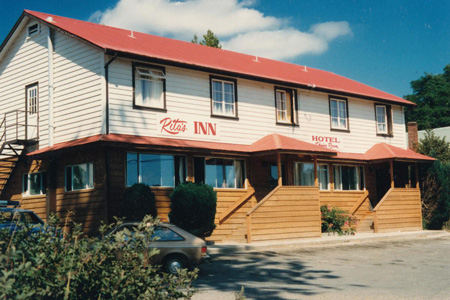 From there I went to the golf club for seven years, and then I bought Salt Spring Inn downtown, which I re-named “Rita’s Inn.” I had it for ten years, 1978 to 1988.

I would not trade it for anything; we had tough times but many good times too. The kitchen was not the way I wanted it, but I worked with it. I never fired anyone. We learned together and worked things out. It was hard work and long hours but proved successful. Hard work never hurt anyone!

Some years were tough; we went through the business recession in 1981. I sold Rita’s when I was very sick. I remember lying there in the hospital. I told Arvid Chalmers what I wanted for it, not too much. I wrote down what did I do and what did it do for me. I made two lines and I told him I would consider reasonable prices, not ridiculous. He came back with an offer and I thought coffins are pretty cheap. I took the bargain and thought I will stick around if the good Lord would give me a job.

I worked at the heritage gift shop for Mrs. Harlan and sold bread from the side of the road for three years. I baked 200 loaves of bread and pies in a weekend. Times were tough and now when I think back and see how things are today and how people are to each other, I think, “Wow! I didn’t have any problems!” I am grateful for so many things. “If you can’t have jam, just have peanut butter.”